The information on this page is meant to provide a very simple explanation of your Y-DNA and mtDNA Ancestry used for genealogical purposes. Scientists estimate that the total amount of Y-DNA of a man is less than 1% and the total amount of mtDNA in either a man or a woman is less than 1%. It is important to understand that after taking a Y-DNA and an mtDNA test, the majority of everyone’s DNA remains untested and it is called Autosomal DNA, with another 5% of a female’s DNA or 2 1/2% of a male’s DNA being x-chromosomal DNA. In a man this would mean roughly 95.5% of his DNA is Autosomal and in a woman, that figure would be roughly 94%

The two basic tests used for genealogy purposes are Y-DNA tests (male) and mtDNA tests (female). Both tests, the Y-DNA and the mtDNA, sample a very small amount of your total DNA and as genetic genealogists know, the test most is taken is for Y-DNA. It can show a relationship between two males; a genetic cousin is a term that is commonly used. The mtDNA test is less practical for genealogical use because traditionally the female’s birth or maiden name changes from generation to generation. With that said, mtDNA still may be used to prove scientifically that two people (male or female) share a common maternal ancestor, although it is more effective at proving two people do not share a common maternal ancestor.

Below is a simple chart showing two children, a brother, and a sister. In addition to them, their parents, grandparents, great grandparents and gg grandparents are also shown for visualization of their DNA Ancestry. Note how the brother has a two-color graphic to show how he carries both Y-DNA and mtDNA. The brother’s sister has a one-color graphic; this is to show that she only carries mtDNA.

Since women do not have Y-DNA, a female will only have one EKA that is associated with her DNA test, her maternal ancestor (straight line mother’s mtDNA). See the chart below to help visualize the Y-DNA and mtDNA Ancestry of the two test participants, the previously mentioned brother and sister.

Please note that there are many other lines of DNA that remain untested even if you have tested both your Y-DNA and your mtDNA. These untested DNA lines are represented below by the circles and boxes that have no interior color, they are your autosomal DNA. Genetic scientists are slowly developing tests that can study and classify your autosomal DNA, but these tests are much more expensive, controversial, complicated and less straight forward than the Y-DNA test or the mtDNA test. 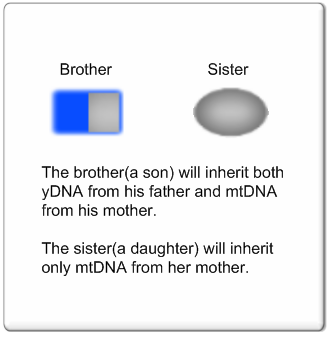 Simplified Chart showing the less than 1% of Y-DNA and/or mtDNA in a brother and a sister. (Fig. 2)

As you can see from figure 1 and 2, a son inherits the Y-DNA of his father and the mtDNA of his mother. A daughter inherits the mtDNA of her mother but not the Y-DNA of her father. Because of a male’s inheritance of both Y-DNA and mtDNA, a male may be tested for both his father’s Y-DNA and his mother’s mtDNA. A female may only test for her mtDNA because she has no Y-DNA from her father.

Even though the male may test both Y-DNA and mtDNA, he cannot pass his mother’s mtDNA to his children. However, he will pass down his father’s Y-DNA to his sons. A female will only pass down her mother’s mtDNA, whether it be to her sons or her daughters. 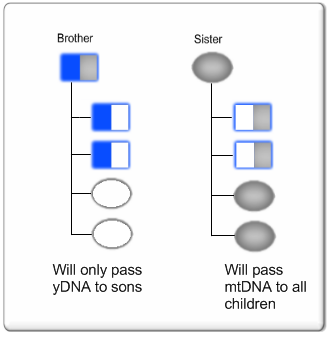 Simplified Chart showing less than 1% of Y-DNA or mtDNA passed down to children from their parents. (Fig. 3)

When the sister starts having children, she will pass her mother’s mtDNA on to her daughters, who will likewise do so to their daughters. She will also pass her mtDNA down to her sons, but as stated above, her sons cannot pass her mtDNA on to their children. She cannot pass down her father’s Y-DNA to her children because she has no Y-DNA. The father of her children will pass his Y-DNA to her sons.

Most genealogists should focus on a Y-DNA Lineage when researching a family surname. The surname lineages are commonly written like this:

In an mtDNA Lineage, you can see the surname of the female changes from generation to generation. In the Y-DNA Lineage, the surname remains the same unless an NPE (non-paternal event) takes place. When researching a Y-DNA line, it is common to focus on the surname as it is usually constant. For example, when researching John Phillips b. 1756 in VA, one assumes they are looking for a father with the Phillips surname.

Suppose it is known that Rachael Smith’s mother’s name was Elizabeth, but Elizabeth’s birth surname is unknown. Perhaps you know that Elizabeth married a John Smith and had a daughter Rachael Smith. You might even know that Elizabeth was b. in 1759 or any other possible piece of information. Unless Elizabeth was a cousin of John Smith or by chance was Smith, her birth surname probably would not have been Smith. You could report this as Elizabeth mnu (maiden name unknown) b. 1759 m. John Smith.  Keep in mind that when someone is researching it is better to have a surname for reference.